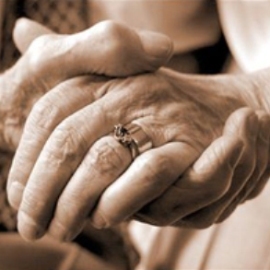 She walked to the bank every Friday to deposit her social security check. She'd been doing it on her own for a long time, since her husband of 49 years died of a brain tumor ten years back. She'd fold the check in half then put it in her wallet, in the zippered part, then click her wallet shut and put it in her pocketbook. She secured the purse strap to her shoulder, put her navy peacoat on over it and left her one bedroom lower level apartment onto Hobart Street, just off Wilshire Blvd., in what is locally known as the Miracle Mile District, in the heart of L.A.

Every once in a while I'd come into town and join Grandma on her weekly walk. Her bank was on the corner of Wilshire and Vermont, a particularly noisy, crowded intersection of two major thoroughfares, but she was used to the hustle and bustle. She was a city girl- from Manhattan first, and she'd lived at the Hobart Street flat just south of Hollywood for 45 years.

She moved down the quiet street of whitewashed, art deco apartments at a hurried pace and with purpose. It was generally somewhat difficult to keep up with her. But on this particular Friday when we turned off her quiet corner onto Wilshire Blvd. Grandma startled, and stopped, seemingly confused.

I practically ran into her. My intrusion into her space brought her back to the present and she scolded me for not paying attention and we were on our way again. Her pace was slower, more cautious, and I knew something was wrong but couldn't figure out what. I offered to go get my car and drive her, and by the tone of her refusal it was clear she didn't care for the implication behind my suggestion.

She picked up her pace so I hurried alongside her in silence the rest of the way to the bank. She opened the glass door, took a few steps inside and stopped dead. I stood panting beside her as she stared around the large, brightly lit space- at the teller behind the long counter, the desks of the managers and sales reps across the way. She took on this horrified expression and her eyes filled with tears and they slid down her face when she blinked.

"I have no idea where I am, or why I'm here." She whispered, clearly shamed. "I know I'm losing my mind. I can feel it but I can't stop it." Then she looked away, out the wall of windows at the crowded intersection beyond.

I'd never seen my grandmother cry, not even at her husband's funeral. She was a hard woman, but smart, even witty at times. But I knew her comments were not made in jest. My mom had been telling me for months that Grandma was losing it. Her normally sharp tongue was telling tales of things that never happened, my mother warned. She was taking too much medication because she'd forget she'd taken it earlier.

Grandma stood in the middle of the bank crying and I stood there gaping without a clue what to do. People started staring so I took her by the arm and led her to a chair by an empty desk. I knelt in front of her, held her hands in mine and told her to look at me. She did. Her gray eyes focused on mine and I saw the fear of age in them. I spoke softly- told her where we were and why, and that we'd walked there together.

Recognition filled her face but her gloom remained. She retrieved a Kleenex from the small travel pack she kept in her purse, dabbed her face and wiped her nose. She needed a minute before going to a teller window and depositing her check. For the life of her she couldn't remember how to do the math required for the cash back she needed.

"I'm going crazy. I just know it." She looked at me and I felt her begging me for salvation.

I gave her my pocket calculator, and while I taught her how to work it I reassured her she no longer needed math skills. We filled out her deposit slip together then checked the math with the machine at the teller window. She slipped her $50 into the zippered part of her wallet then put it in her pocketbook and we were on our way.

Though I wanted to, I though better of suggesting she stay at the bank and I go get my car. She seemed back to her old self, hustling along Wilshire Blvd. I paced her in silence back to her flat halfway down Hobart Street. Inside her own environment she seemed at ease. We watched her favorite soap opera and then she made us scrambled eggs with onions for lunch. I helped her with the dishes and left, making light of her dementia with senior moment jokes and feeling confident Grandma was going to be just fine.

I did not accompany her to the bank the following Friday. When she got to the teller window and realized she'd lost the calculator she panicked and became disoriented again. The teller was kind enough to call my mom who came from the Valley to pick her up and drive her the half a mile home. That afternoon, an hour or two after my mom left her, grandma took three doses of Valium in less than an hour and ended up in the hospital with an overdose.

Not too long after that my mother got a court order for legal custody of her mother. Those rare moments in the beginning when my grandmother was still lucid she resented the hell out of her daughter's authority and the Home she was forced to reside in. But her anger gave way to wonder as the dementia took hold and her memories were replaced by complex fantasies of exotic places she'd traveled and events she was never a part of.

In less than six months from the second bank incident my grandmother did not recognized her family, did not know her own daughter and claimed she never had a child. Though my mother continued to visit her weekly for the next two years Grandma never acknowledged she had a daughter. Though this took its toll on my mother, my grandmother was none the wiser, seemed better off since crossing the line of reality all the way. Her flat gray eyes filled with excitement when she told of her adventures on Safari in the jungles of Africa that week.

Her fantasies shielded her from harsh realities present and looming. At 85, her body and mind were shutting down, her time running out. She was facing death. Dementia was her reprieve. Insanity served her. But getting there--watching herself lose her mind must have been hellish.
Posted by J. Cafesin

I can completely identify with the story you wrote about your grandmother. My own mother, the magnificent heroine in my memoir, Becoming Alice, who actually supported our family when we were immigrants by running a mom-and-pop grocery store, was an Alzheimer victim for the last 13 years of her life. The pain that she and our family endured are undescribable. A cure cannot come too soon.
http://www.alicerene.com

Your story is very sad because it came on so suddenly. Not all dementia follows that course. My mother's mother began a long, slow intellectual decline in her sixties, triggered perhaps by my grandfather's death. She "lost it" gradually, and it never seemed to bother her; she had not been an intellectual heavyweight, and for a long time she was able to cope with the small world she was used to.

I remember her staying with my parents, repeatedly asking me if that was my grandmother moving around upstairs, and telling me that she had gone to school with my other grandmother; at that stage she still seemed to have some hazy idea of who I was. She eventually died in a nursing home at the age of 94, by which point she believed she was 50, had no clue who any of her relatives were, and was still chasing the old men around the home until her final illness.

My mother is now 75 and starting to show some signs: forgetting words, sudden irrational irritability, and so on. I can't get her to go to the doctor for an assessment. I'm hoping that her decline will be as gradual and as relatively painless as my grandmother's. She also seems to worry less about things recently, so perhaps dementia has its own small blessings. God bless all of you out there who are coping with this.

My grandmother took years to get where yours got in such a short time...that must have been awful the the family and your Mom. Alzheimer's is the most debilitating disease because it leaves the body but slowly takes who the person really is away.

I remember my grandmother and the fear that use to take her over and there was nothing any of us could do to help her.

My mother-in-law was stolen from me by dementia. By the time I met her, she was in her early 70's and her eyes had that vacant, trapped, "I-can-fake-my-way-out-of-this" look that I will never forget. She was always agitated and would pick, pick, pick at her pants, a towel, anything, perhaps seeing stray things none of us did. My husband would go to the family home where his mother lived with her bachelor son, Gary. Irene, my mother-in-law, would look at my husband and ask where the "other Gary" was. It ate at his soul like a cancer.

I am just now dealing with the devastating consequences of an aging mind. My mother is very intelligent and quite angry that she can no longer put together a complete sentence without assistance with the missing words. She was a writer of short stories, poems, and music. She still plays the piano every week at the Senior Center. But just last week she had a truly scary day when she couldn't lift her arms or legs to get off the couch. She was there for hours, unable to even get to the bathroom. She's in NY; I'm in NV. Thankfully, my daughter has stepped up to help her grandmother. Now it's time to find an assisted living facility that will accept her with her limited income. No one in my family has alot of money. I've been out of work since April first, and am barely getting by on unemployment. I pray, God looks down upon us and shows us the way to help her get through her last years in comfort.

I can relate to all these stories too.I am watching my mom gradually decline mentally. While she acknowledges that she doesn't remember things as well as she used to, she attributes it to normal aging and resisted my taking her to the neurologist who diagnosed early dementia. It's the times that she forgets who I am that is so frightening since I know there will be a day when she doesn't "snap out of it". The vacant look you describe is exactly what comes over her when she forget, often followed by an agitation that can be difficult to deal with. With so many people living well beyond the 80's today, more and more if us will be dealing with Alzheimers in relatives and perhaps in outselves,