Out of Body? Or Out of My Mind? 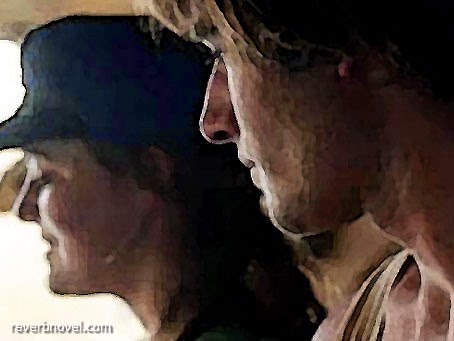 I'm participating in one of the creepiest, weirdest, most...surreal experiences I've ever had.

Greg Tremblay is a voice actor currently producing the audiobook for my novel Reverb. We met through ACX, Amazon's audiobook portal which hooks up authors with actors/producers for creating audiobooks to sell exclusively through Amazon and their channel partners. I didn't consider Reverb being an audiobook until several reader inquired if I had one available. I'd never heard an audiobook before. Every time I try to listen to one, in a friend or relative's car, my mind drifts, generally first to the scenery, then it begins a-wanderin. It does with TV too. Can't help it. Not much holds my attention the way my imagination does.

I'm currently reviewing the chapters of Reverb Greg has recorded to date. A practiced professional, he's 'playing' all characters true to their voice and nature. It's bizarre at best giving voice to the people I'd only heard in my head, but he's particularly nailed James, the protagonist in the novel, with his cultivated British accent, the rich tenor of his voice. And it's creeping me out. I get anxious, breathless, listening. The story, in parts “brutally raw,” is hard enough to read, yet alone hear, and the intensity of Greg's deliver so palpable it feels real.

James has been inside my head since I was a kid. Made him up when I felt afraid. Started when I was little, pretending to be a guy because men were supposed to be stronger than women, and when I felt scared I sought strength. I found it in James. As I grew he took on a life of his own, with a complex family history. He was brilliant, what I always wished to be, and insular, like most men seemed to me. Felt compelled to write about him to shed him from me completely. In giving him ground, perhaps I too could find some, learn to handle fear on my own.

For quite some time after finishing the novel, our separation was complete. Fear still takes me by the throat and is choking, often, but now I deal with it instead of cloaking James. He's merely a character in a novel, after all. But not anymore. Greg's voice has taken James outside of my head. He's been actualized, made real. And having James out there somewhere now, playing out the rest of his life story as I write this blog, is on the extreme end of surreal.

The most exquisitely bizarre bit—I can't wait for the next chapter Greg delivers to hear James again, be with him, in the same room, the same space, camera pov, a fly on the wall—listening/watching. “Addicting read,” several reviewers have called Reverb. I get that now, and other reviews like, “frantically turning the pages to see what happens next.” I can't wait to hear the rest of his story, like I didn't write it. Someone else who knows James did.


I'm unclear if these feelings, this surreal experience is typical for other writers whose work is actualized in voice or video. For authors currently involved in the process, or those who've previously brought their work from the page to the airwaves, please use the comment box to share your experience.
Posted by J. Cafesin