Proud to be Fat 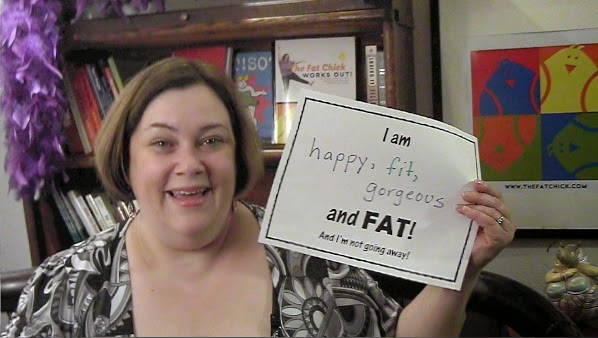 #Litchat hosted an author on Twitter who'd written a book on accepting herself for being fat.

And I had a problem with that.

Annoyed with the conversation—the politically correct yet ignorant people stroking the author's ego with praise, I joined in the dialog.

I tweeted, “As a society, we need to stop making excuses for poor diet and giving into every whim. Self-discipline is key, not self-acceptance.”

The author tweeted back, “I can't help being fat.”

The following 5 tweets were from the politically correct folks slamming me for being rude to the author.

My next tweet to the author: “Are you one of the less than 2% with a thyroid problem or other medical condition to account for being overweight?”

The author didn't respond, but the PC tweeters did: “Why so intolerant and provoking to the guest host, @jcafesin?” This was retweeted at least 5 times.

While it's politically correct to have 'tolerance,' for fat people, it serves only the PC tweeters, helps them look kindly at themselves in the mirror, assure themselves that they are a good person. But are they? Promoting acceptance of bad/destructive behavior led to Nazi Germany, among other global and local atrocities.

We all know the facts on obesity. If you don't, here's just a few from the CDC:
● Obesity-related conditions include heart disease, stroke, type 2 diabetes and certain types of cancer, some of the leading causes of preventable death.
● The estimated annual medical cost of obesity in the U.S. was $147 billion in 2008 U.S. dollars; the medical costs for people who are obese were $1,429 higher than those of normal weight.
● Childhood obesity has more than doubled in children and quadrupled in adolescents in the past 30 years.
● 70% of obese youth have at least one risk factor for cardiovascular disease.
● Obese adolescents are more likely to have prediabetes, a condition in which blood glucose levels indicate a high risk for development of diabetes.
● Children and adolescents who are obese are at greater risk for bone and joint problems, sleep apnea, and social and psychological problems.
● Obese children are likely to be obese as adults.
● Increased risk for many types of cancer, including cancer of the breast, colon, endometrium, esophagus, kidney, pancreas, gall bladder, thyroid, ovary, cervix, and prostate, as well as multiple myeloma and Hodgkin’s lymphoma.

While the PC tweeters strive to appear tolerant, they are, in fact, promoting bad behavior by accepting the authors premise that being fat is just dandy. Accepting obesity inadvertently teaches our children that there's nothing wrong with being fat. But this is a lie. Promoting self-acceptance of obesity, instead of teaching self-discipline, allows our kids to continue making poor eating choice, thus damning them to a host of health problems throughout their lives.

The PC tweeters praising the author's book, her position, then defending it against me was beyond ignorant, it was selfish. Another book on a positive self-image for being overweight we clearly do not need. Google returned 14,500,000 results for 'Books on Proud to be Fat.' Proud to be Fat is a powerful, though misguided movement, spawned by either overweight or politically correct people looking to feel good about themselves whatever they do, or are.

The Litchat guest author of the Proud to be Fat book copped an attitude that I was evil with my first comment. Conversely, had I had the support of other tweeters, my remarks could have been construed as refreshing, enlightening, rather freeing. Contrary to her tweet, it IS her fault she is fat, assuming she is disease free. My comments, and subsequent healthy suggestions empowered her with the knowledge she could in fact change, get fit.

Social media is filled with PC tweeters, Facebook updaters, bloggers...etc., that tow the politically correct line, generally serving themselves and no one else. The internet is an incredibly powerful communication tool. For the first time in history it's providing us a method to individually reach the masses, in which we can effectively help each other be better, smarter, healthier, reach our creative and compassionate potential. But we have to be willing to go out on a limb, stand alone among the hordes of self-serving ignorant and promote the truth.
Posted by J. Cafesin

You've touched on a hot issue: people justifying their lack of self control. You can tell by the anger of the responses that, deep down, they know you're right.

One other point here: that of rewarding any behavior. Are we so weak of ego that we need to justify, to feel proud of even a failing? Where is the sense that when everyone is a super hero, no one is?

It could have been any other potentially fatal condition besides obesity and the attitude would have been the same which is, the need to find a way for it to be ok because the denial about the fear of letting go of the behavior is so intense. She is not ready to see what she is doing to herself and is definitely not willing to see that she has gone to the length of writing a book to justify it. We see this kind of attitude all the time. It's sort of like, hey, I am going to find a way to justify my addiction and I'm going to drag you along with me so you can also justify your unhealthy choices.

I have battled one addiction after another my entire life. I have type 2 diabetes due to my compulsive eating and I am going for the sleeve gastrectomy on 31 may. not to lose the weight, although we know this will happen, but because if I keep waiting for ME to get the food under control, the diabetes will be ravaging my body and the damage will be irreversible. I have also engaged a therapist - an eating disorder specialist - to help me deal because I want this to be the last time. I do not want to be one of those people who thinks the surgery is the cure-all. Too many people think that and gain the weight back. they really think their stomach is the problem. It's not. It's their heads.

I deny the voices in my head daily, hourly, minute by minute that suggest, beg, prod me to eat crap. It's really really hard to resist them. My mom instilled a lot of guilt though, which helps enormously. She didn't accept me as fat, which I was all the years I was growing up. She was constantly on my case, which has paid off in evoking self-discipline in adulthood! Her voice, which is now the voice in me, helps me run or use the elliptical for 5 mi a day, 5 days a week, and I HATE exercise!! Yea mom!! Wish I'd told her that when she was alive...

Part of the issue that we do not want to address is the fact that a lot of what we are eating is not real food. It's chemicals combined to simulate food. We are contributing to our brains and our bodies being utterly confused about what to do with the fake food we are eating and this contributes to the obsessive thoughts and compulsive behavior around food. None of us overeat broccoli, ya know? None of us fantasize about sauteed spinach.

Healthline recently put together an infograph showcasing heart disease statistics and facts to help someone understand their risk for a heart attack or other heart-related issues. You can see the infograhic here: http://www.healthline.com/health/heart-disease-infographic

I am writing to you to see if you can help spread awareness about heart disease by sharing this with your followers or including it as a resource on your page: http://jcafesin.blogspot.com/2014/04/proud-to-be-fat.html

Please let me know if you would be interested in helping to raise awareness about heart disease.

Thank you for your time reviewing. Please let me know if there are any questions I can answer.

This is nothing more than pandering to the 'lowest common denominator,' as has become typical of American ("Amurikun") slob mentality. It is piteous and shameful that so many Americans are now raising a generation of children who are rewarded for misanthropy, excess, sloth and mediocrity, because their parents model and endorse such behaviors. The Media (most prominently, television "Reality" programming and "FOX News") neatly mirrors this national, endemic spiraling into the miasma of Hecate that...

I both agree and disagree with you. I think we need to accept and love the person in the mirror regardless of what that person looks like and fat shaming keeps people in the cycle of failure that keeps them obese. The origin of my shame and failure started when my dad and brother called me fat ass when my teenaged ass was a size 8...now it's an 18.

What we need to not accept is the behavior that put someone into obesity...the overeating and inactivity. I recently started on the diabetic diet after being forced to confront my abnormal blood sugar. When you actually weigh/measure food for carbs, it's amazing how small the portion of 25 grams is. After only 1 week on this plan, I can actually see the fat melting off me on a daily basis. I wake up in the morning and parts of me are noticeably smaller.

I think it's wonderful, J, that you were able to take your mom's messages and turn them into a positive motivating you to eat less and work out regularly. The messages I received were more shame/failure driven.

I wish my PE teachers growing up accepted me as I was--a nonathletic person--and encouraged me to have a goal of personal fitness rather than shaming me for my lack of skills in team sports. I think a positive person at that time could have had an impact.

I think you should have challenged the author on her placard, just on the facts. She claimed to be fit but it's obvious she could not prove that...just working out does not make you fit.

I would also have asked to see her current metabolic labs. There's no way she has normal hemoglobin, Hba1c, cholesterol, and triglycerides at that size. She's probably on several medications to keep her regulated which also belies a "fit" label.